I wanted to take an opportunity to talk about why I write what I write. Sometimes my themes are dark, they hurt, or disgust, or they make readers sad. There’s joy, fun, embarrassment, love, desire, and everything in between as well, but I don’t shy away from pain because life is painful. I’m writing creatures of darkness and so I want to explore their darkness. I wouldn’t have vampire heroes if I wanted them to walk in sunlight.

I know that isn’t everyone’s cup of tea. Some people prefer their reading material to be brighter and we should all accept that, but I like having a book or series break my heart and put it back together again. I grew up with Catherine Cookson, Watership Down, The Animals of Farthing Wood, Handmaid’s Tale, To Kill a Mockingbird… Oppression, murder, death, grief, rape are all themes I grew up with alongside vampire novels and fantasy books. I found value in those stories because they are emotive and they teach us something about humanity, and maybe about ourselves too.

When I write about infertility, miscarriage, and still birth, I write about it from the perspective of someone who thought she’d never have children. When my husband and I started trying for a baby, we discovered I’m sub-fertile. We spent several years seeing fertility doctors, being told there was nothing we could do, and we might not have children. It made seeing babies and pregnant women difficult for me, and there was a constant sense of loss because something I’d always wanted and expected to have had been taken from me. I’m lucky in that I did eventually fall pregnant and now have a wonderful daughter and son, but I remember that grief and pain.

I want to raise awareness that both men and women can suffer because of infertility and pregnancy loss. It’s not something we should brush under the carpet. We should be open about it. Normalise talking about it so those going through it know they aren’t alone and can find support. If my writing creates an empathy for those struggling with infertility or the loss of a child, then I’ve achieved something.

When I write a rape or sexual assault, I don’t do it to glorify it. I do it to show how harmful it is, and to deal with the PTSD that follows. I write the constant ongoing shame because a peer did something to me as a child, and I lived with constant shame for years because of it. I was in my thirties before I even admitted what had happened to my mam and my therapist. I was assaulted in my late teens too, just like many people are, and we need to understand how damaging that culture of entitlement is and how long-lasting the trauma can be.

I want to raise awareness, to say this happens and people don’t just get over it. These events become a constant background anxiety, but that doesn’t mean victims aren’t also strong. Victims of rape and assault deserve to be the heroes of their story just as much as bad-ass martial artists. It’s another perspective on what makes a strong MC, and we all benefit from visiting other perspectives from time to time.

With what’s happening in America over abortion laws and female access to medicine, it’s more important than ever that we look at the autonomy of women and how some men feel they have the right to use or control women’s bodies as though we’re back in the early 1900s. We lose our jobs for having babies, but some want to ban options that prevent it. Women standing up for their right to decide for themselves whether they want sex, or to have a child, is hugely important. To understand why we need to fight, it helps to understand the ways in which women can be oppressed, objectified, and victimised.

When I write about abuse, both verbal and physical, I do so because between the ages of six and fourteen I was horrifically bullied. The peer abuse I went through was almost daily, and it led to illness and mental health problems before my age even reached double figures. It was so severe that it left me with a personality disorder. I was called, accused, belittled, attacked with metal posts, wooden slats, stones, fists, feet, all on top of the daily emotional abuse that meant I felt too afraid to go outside most days. I retreated into reading and writing because the world outside my front door was lonely and painful. I was lucky to have a family who loved me, but the world outside did damage that I’ve never managed to repair.

When I write the pain of someone who has been victimised, I do it to explain how trauma carries on even after an attack is over. I tell that story because it’s hard to stand after that type of trauma. I want to world to understand that not all scars are visible, but that it’s OK to have scars. Wouldn’t it be better if we vilified abusers but gave victims compassion and understand, allowing them to live with their pain without feeling they need to be ashamed by it or hide it? People who survive abuse of any kind deserve to have their voices heard, without fear or shame, so yes, I ask my readers to go on that journey and empathise with it.

When I write about struggling to come to terms with sexuality or have bi/gay/pan characters, it’s because I’m bi and I’ve lived with the secrecy and shame of not coming out because I was afraid of how people might react. Many of my main characters are bi, or they’re gay, or polyamorous, or they’re into kinks and fetishes. It isn’t always obvious or outspoken, but it’s there because that’s life and we shouldn’t be ashamed or afraid of sexuality. I’ve had people DM me to say I should warn people about LGBTQ+ themes in advance because they don’t want to see it, but LGBTQ+ people don’t need a warning label. We are part of the world and we don’t come with trigger warnings. If you are offended by LGBTQ+ representation in books then you are the problem, not the books.

Some of my stories are dark. They’re meant to make you uncomfortable. They’re meant to show that even when I person has suffered and has cracks in their emotional armour, they can still be strong, they can still hope, and dream, and they don’t need to be ashamed of what was done to them. I want my readers to feel the highest highs and the lowest lows because that is life. I try to weave that tale using vampires, werewolves, gods, elves, fae, and a dose of nerdiness and pop culture, but the journey is bigger than some people imagine when I say I write vampire books.

I’m not ashamed of what I’ve survived, and I’m not ashamed of exploring it through my writing. That means I’m not everyone’s cup of tea, and that’s OK. If you want a happy ending in every book, I’m probably not for you. One of the most grief-filled books I’ve written was penned whilst my dad had cancer and shortly after he died. There’s reality in my writing even while my books are fantastical. I put my heart and soul into my work, my pain and my joy, to narrate an adventure. I hope that comes across in my books. For those who don’t like that, I can only say I’m sorry.

If you’re willing to put your heart in my hands, trusting that I’ll get it to the end of the series, then I’ll try to take you on a journey. Although I categorise my work as urban fantasy, I’d also call it epic romance. What do I mean by that? Well, the end of any individual book might not get to the HEA resolution most romances need, but the series will tell an epic story of overcoming overwhelming odds to finally get where the characters need to be. Let me break your heart because I promise I will put it back together again. I’ll do that because it’s how we live. We struggle, we fall, but we keep going in the hope that we find contentment. That’s the sort of story I enjoy being told, and the type of tale I enjoy telling.

Posted by Angela Louise McGurk at 15:49 No comments:

I am pleased to announce that Wolf Bitten: Vampire Cohorts Book Three will be released in both paperback and ebook at the end of this month! For now, here's a sneaky peek at the cover. 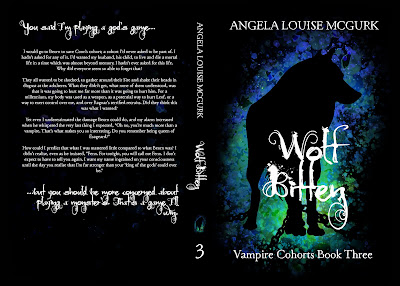 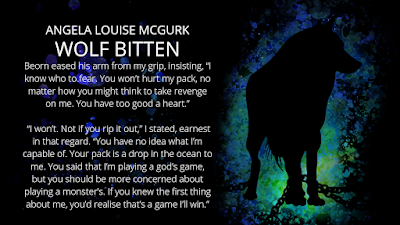 Lots of love to all my loyal readers!